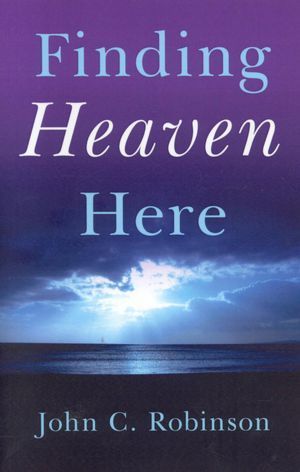 To become a clinical psychologist. I spent nine years in college and graduate school studying the nature, causes, and treatment of psychological disorders and three decades working in the profession in numerous settings and capacities. Although I learned a great deal about the psychological basis of human suffering, my understanding always felt incomplete. In my heart of hearts I knew there was something missing -- something fundamentally spiritual about our suffering and our joy, a dimension of reality as important and verifiable as anything psychology studied. Only recently did I realize that this spiritual dimension was the experience of Heaven on Earth. Let me explain how I arrived at this realization.

As a child, I sensed a pervasive, radiantly beautiful, living mystical reality shining all around me. Running in summer sunshine, bare feet on grass wet with morning dew, myself and all things bursting with the energy, consciousness, and joy of Creation, life felt too full to contain. Spirit filled the world with implicit love, its light illuminating natural beauty like a colorful stained-glass window, its presence a great invisible tide moving through everything. Though at the time I couldn’t express these sentiments in adult words, I remember the joy of this experience nearly lifting my feet off the ground.

Meandering through grassy fields like a mystical explorer, I touched rough-hewn bark, studied daffodils and smelled the subtle fragrances of earthy flowerbeds in the noonday heat. Birds’ songs virtually hypnotized me with their sweet melodies. Everything appeared precious and timeless, and I had no thought of yesterday or tomorrow. I adored -- almost worshiped -- my mother and father for their magnificent beauty, natural charisma and angelic presence. Everything seemed fascinating, perfect, spacious, and complete and I unquestionably assumed this wonderland would be mine forever.

Then, gradually, insidiously, but insistently, beliefs and expectations from the World of Man descended upon my bright and colorful existence. Adults had little or no interest in the divine world. Busy with tasks, schedules and conversations, they rarely stopped to appreciate the inexhaustible beauty I witnessed everywhere. "Why is this happening?" I wondered, as I watched adult concepts about behavior and personal value infect siblings and friends like a contagious illness.

Over the ensuing years, I felt repeatedly saddened as those around me exchanged the divine world for these new worries about self worth. A protective numbness, however, soon moved over my soul and I shut down emotionally and spiritually. Looking back, of course, I realize that my experience represented the universal fall from grace -- the magic of Creation -- into the World of Man with its conceptual grid of beliefs, rules, and expectations.

The years I spent in middle school proved an especially hard period for me. As old friends tried on new identities, competing in games of popularity and discarding undesirables like trash, I felt alone and naked. I didn’t want to wear an identity but felt vulnerable without one. During the same period, I suffered the unexpected trauma of open-heart surgery to correct a birth defect. When I awoke from the anesthesia, I wondered, "Where was the joy of the bright world now?"

Years passed. Then, one evening in midlife, I read the following account of one man’s mystical experience in William Stace’s "Mysticism and Philosophy": "The room in which I was standing looked out onto the backyards of a tenement. The buildings were decrepit and ugly, the ground covered with boards, rags, and debris. Suddenly every object in my field of vision took on a curious and intense kind of existence of its own … And every object, seen under this aspect, appeared exceeding beautiful. There was a cat out there with its head lifted, effortlessly watching a wasp that moved without moving just above its head. Everything was urgent with life … which was the same in the cat, the wasp and the broken bottles, and merely manifested itself differently in these individuals … All things seemed to glow with a light that came from within them…

I experienced a complete certainty that at that moment I saw things as they really were, and I was filled with grief at the realization of the real situation of human beings, living continuously in the midst of all this without being aware of it. This thought filled my mind, and I wept. But I also wept over the things, themselves, which we never saw and which we made ugly in our ignorance … My immediate reflections on the experience at the window were as follows: I saw how absurd had been my expectations of a vision of God … For I had no doubt that I had seen God … it turned out to be the world that I looked at everyday … As Blake put it, 'all life is holy' and that is enough; even the desire for more seems to me more spiritual greed. It is enough that things are, a man who is not content with what is simply does not know what is."

I put the book down and stood by the bedroom window for a long time, stunned and speechless, as if the Earth had suddenly stopped spinning. Then I understood. In his mystical experience, this man had actually witnessed the divine world: radiantly beautiful, literally alive, and always present despite our failure to see it -- and the place he described was the place I had known as a child.

The search for Heaven on Earth now consumed me, but, as a result, gifts of guidance, insight and revelation began arriving daily. When you knock on Heaven's door, it opens. As if guided from above, I kept creating what I later called "experiments in consciousness," processes meant to sharpen our natural mystical sensitivity for God’s Presence. Since the mystics from across traditions consistently have said God lies beyond ideas and beliefs, I developed one experiment that involved examining reality with intentionally heightened and thoughtless awareness. Wide-eyed and wide awake, I would stare intensely at something -- a book, a lamp, a flower, my hand -- until its sensory qualities became hyper-real, exquisitely detailed and beautiful, exceptionally bright and colorful. I saw how the ever-present lens of thought had in the past filtered out the object’s captivating beauty and said to myself, "The world is completely different than what we think and far more amazing." This observation confirmed the man’s mystical account I had read in Staces’ book and suggested to me that anyone could learn to see the divine world intentionally.

I could hardly believe my eyes. The beauty, perfection and wonder of my childhood divine world had returned. Once again I walked in a bright wonderland of extraordinary sights, colors, smells, and sounds. For me, such things as green leaves in speckled morning light shining through dusty windows now held all the hushed holiness of a magnificent stained glass window in a cathedral.

Astonished and enthralled, I practiced these experiments at home, in stores, at work, and outside. I understood that this omnipresent consciousness belonged to God and marveled at its power to transfigure reality before my eyes, peeling away the ugliness I normally saw in the world like old paint to reveal a radiant paradise beneath. Now Heaven on Earth appeared everywhere.

But Where Is God? Psychotherapy and the Religious Search

"I wish you the very best of luck in bringing out your work...Its value is evident to me and you deserve a large and grateful audience for it." Kenneth Ring, Ph.D., Author Heading Toward Omega

Creating Resilience in Times of Crisis

Aging with Vision, Hope and Courage in a Time of Crisis

The Center for Progressive Christianity

Spirituality and the Coronavirus

Protecting What You Know To Be Sacred

Caring for the World in the Flow of Soul

Ancestors, Angels, and Spirit Guides: Help From the Other side